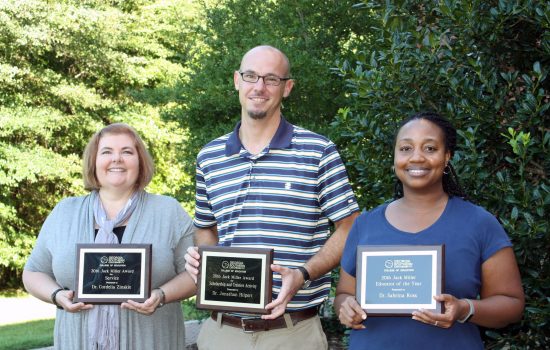 The Jack Miller Faculty Awards are given annually to recognize Georgia Southern University’s College of Education (COE) faculty for demonstrated excellence in areas of teaching, service, and/or scholarship. Awards can be given in each area along with an additional Educator of the Year Award, which recognizes scholarship in all three of the considered areas.

Sabrina Ross received the Jack Miller Educator of the Year award, recognizing her proven success in all areas including teaching, service, and scholarship. Ross joined Georgia Southern in 2009 and is an associate professor in the Department of Curriculum, Foundations, and Reading. She previously served as a visiting professor of women’s and gender studies and African American studies at the University of North Carolina at Greensboro where she also earned her doctorate in curriculum and teaching with a cultural studies concentration. Ross chairs doctoral dissertations for the College as well as serves as a Faculty Senator for Georgia Southern University Faculty Senate.

Her research interests include the influence of ethnic and gender identities on schooling processes and outcomes; experiences of women faculty of color in higher education; and contributions of black feminist and womanist philosophies to educational practices.

Jonathan Hilpert, winner of the Jack Miller Award for Scholarship and Creative Activity, is an associate professor of educational psychology in the Department of Curriculum, Foundations, and Reading. Hilpert joined the COE faculty in 2012, after serving as an assistant professor at Indiana-Purdue University at Fort Wayne. He provides leadership at the national level, serving as Division C, Section 1e engineering and computer science section chair for the American Education Research Association (AERA), as well as president elect of the Southwest Consortium for Innovative Psychology in Education (SCIPIE).

Hilpert’s research focuses on examining student engagement and interactive learning in post-secondary STEM courses from a complex systems perspective, including the emergent and dynamic qualities of psychological and collaborative systems and their underlying network structures.

Cordelia Zinskie was this year’s recipient of the Jack Miller Award for Service. A faculty member in the College of Education since 1993, Zinskie has previously been honored as the Educator of the Year (2005). She is as a professor in the Department of Curriculum, Foundations, and Reading, the same department in which she was acting chair from 2006-2013. Zinskie serves as the conference co-chair for the National Youth-At-Risk conference held annually in Savannah, and she also serves as the editor of the National Youth-At-Risk Journal.

Jack Miller was the former Dean of the College of Education at Georgia Southern. He endowed the Jack Miller Faculty Awards in 1994 after leaving to accept the position of Dean of the College of Education at Florida State University. In September 2016, Miller retired from his position as the President of Central Connecticut State University. The awards are open to all full-time, tenure-track COE faculty who have completed at least three years of full-time service at the University.

For more information about the Jack Miller Awards or to view past recipients, visit https://coe.georgiasouthern.edu/awards/