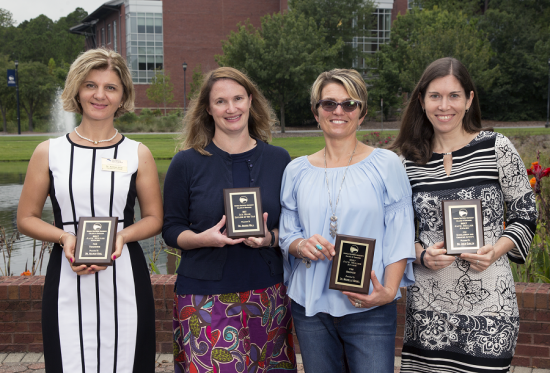 The Jack Miller Faculty Awards are given annually to recognize Georgia Southern University College of Education (COE) faculty for demonstrated excellence in areas of teaching, service and/or scholarship. Awards can be given in each area along with an additional Educator of the Year Award, which recognizes scholarship in all three of the considered areas.

Amanda Wall received the Jack Miller Educator of the Year Award, recognizing her proven success in all award areas including teaching, service and scholarship. Wall is an assistant professor of middle grades education in the Department of Teaching and Learning. She joined Georgia Southern in 2013 after completing her doctorate in teacher education from the University of North Carolina at Greensboro. Since 2014, Wall has served as the faculty advisor for the Collegiate Middle Level Association (CMLA). She is an active member in several professional organizations including: the American Classical League; American Educational Research Association; Association for Middle Level Education; Georgia Middle School Association; and the National Association of Professors of Middle Level Education.

Aslihan Unal, recipient of the Jack Miller Award for Teaching, is an assistant professor in the Department of Teaching and Learning. Unal teaches graduate-level courses in the master’s of curriculum and instruction–accomplished teaching program. A member of the COE faculty since 2013, she previously served as an assistant professor at Usak University in Usak, Turkey. Unal earned a Ph.D. in Elementary Education from Florida State University. She also holds a master’s in elementary education from the University of Missouri and a bachelor’s in elementary education from Pamukkale University in Turkey.

The Jack Miller Award for Scholarship and Creative Activity was awarded to Department of Teaching and Learning’s Julie Garlen. Recently promoted to the full rank of professor, Garlen serves as the program coordinator of the M.A.T. in Early Childhood Education degree program. A Triple Eagle Alumna, Garlen earned a bachelor’s and master’s in history as well as a doctorate in curriculum studies from Georgia Southern University. This is the third Jack Miller Award that Garlen has received, as she earned the award in the area of teaching in 2014 and the award for service in 2012. She has also received a University Award for Excellence in Service (2013).

Primary research interests for Garlen include early childhood education and cultural curriculum studies, including critical childhood studies and pop culture pedagogies. She has recently published articles in Feminist Media Studies, Curriculum Inquiry, The Journal of Consumer Culture, Educational Studies, and Review of Education, Pedagogy, and Cultural Studies. She is the co-editor of two volumes published in 2016: Disney, Culture, and Curriculum and Teaching with Disney.

Michelle Reidel was named winner of the Jack Miller Award for Service. An associate professor in the Department of Teaching and Learning, Reidel serves as the program coordinator for both the M.Ed. in Secondary Education and M.Ed. in Middle Grades Education degree programs. She joined Georgia Southern in 2006 after serving as an instructor at the University of Colorado-Boulder where she earned her doctorate in curriculum and instruction, specializing in social studies education. Reidel is also a previous winner of the Jack Miller Award for Teaching (2009). She serves as the coordinator of the Southeast Regional Social Studies Fair  and is an active supporter of the Ferst Foundation for Childhood Literacy.

Reidel’s research interests include democratic education, social studies teacher education and the role of emotion in teaching and learning.

The Jack Miller Faculty Awards are given each fall during the College’s annual meeting.

Jack Miller was the former Dean of the College of Education at Georgia Southern. He endowed the Jack Miller Faculty Awards in 1994 after leaving to accept the position of Dean of the College of Education at Florida State University. In September 2016, Miller retired from his position as the President of Central Connecticut State University. The awards are open to all full-time, tenure-track COE faculty who have completed at least three years of full-time service at the University.

For more information about the Jack Miller Awards or to view past recipients, visit https://coe.georgiasouthern.edu/awards/