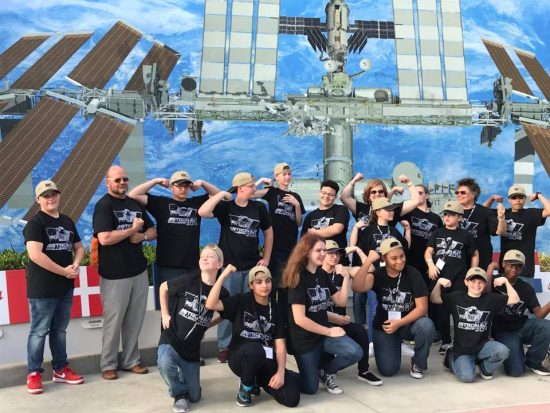 College of Education professor Barbara Serianni (back row, 2nd from the right), Ph.D., traveled with the Isle of Hope Astronaut Club to compete in the 2018 Student Astronaut Challenge National Finals at the Kennedy Space Center in Cape Canaveral, Florida.

Georgia Southern University College of Education (COE) professor Barbara Serianni, Ph.D., is partnering with Isle of Hope K-8 School in Savannah, Georgia, to help their students reach for the stars.

Serianni has contributed her education expertise, assisting students with science and mathematics skills, since the creation of the Isle of Hope Astronaut Club in 2016. She also served as a coach for the Astronaut Challenge alongside Isle of Hope’s Carolyn Rethwisch, science teacher and creator of the Astronaut Club, and Wade Smith, Science, Technology, Engineering, Art and Mathematics teacher, during the 2017-18 competition year.

“After assisting with the program the first year, I realized what an impact the Astronaut Club was having on these students, and I wanted to do more,” she said.

This year, both teams from Isle of Hope qualified as two of the six Georgia teams going to the national competition, and in February, Serianni, Rethwisch and Smith took 18 middle school students to the Space Center to compete.

Outside of competition, the students recruit their peers. 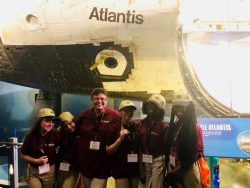 “It’s really cool to see these middle school students in the club going to talk about their experiences with the elementary school students,” she said. “They are recruiting not only for a Junior Astronaut Club but also working to get their own classmates involved as well. The really great thing to watch is how they interact with the younger students. You can see the ‘teacher’ in them as they share their experiences, read and teach them to fly.”

In just two years, students in the club have shown growth and their participation helps spur healthy competition and reflection among the students, noted Serianni.

“Students realize their strengths and weaknesses while preparing to tryout for the competition teams, as well as during the regional and national challenges,” she said. “They are encouraged by this club to try harder so they can come back to compete the following year.”

Serianni plans to continue as an Astronaut Club coach and aims to help students sharpen their skills.

“I hope to make a difference for the students there,” Serianni said.

An assistant professor in the COE’s Department of Elementary and Special Education, Serianni has over 20 years of varied experience in the education field. She has served as a mathematics teacher, principal, co-founder and co-director of a educational grant consulting firm, online instructor, instructional technology consultant, learning coach and college professor. Her years of experience have provided her a unique perspective on her primary research interests including inclusive practices, student engagement and positive behavior support.