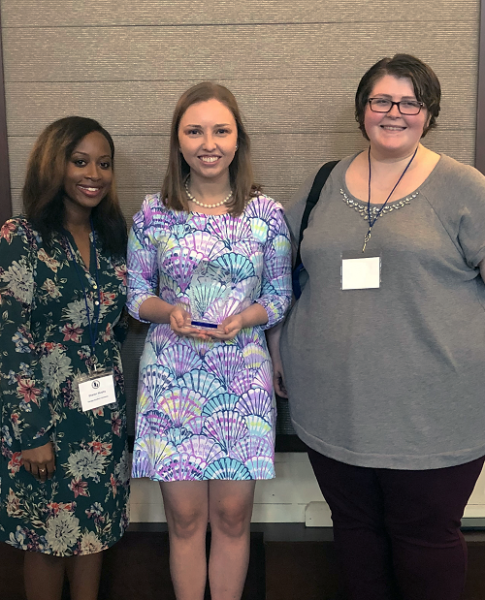 In addition, Martin and Murphy both received the GASP’s Christine Daley School Psychologist Student Scholarship. Given to students majoring in school psychology in a Georgia program, the $1,000 scholarship is awarded to two graduate students annually. Recipients of the award were selected based on academic success in their graduate program, leadership experience, strong recommendations from professors and a desire to contribute to the school psychology field in the state of Georgia.

Martin, who earned a bachelor’s in psychology from Georgia Southern, is a member of GASP as well as the National Association of School Psychologists (NASP). She is in her first semester of internship at Bulloch County Schools and is expected to graduate in May 2019.

“I was so honored to receive this scholarship and be recognized for my achievements,” Martin said. “These funds will make it possible to continue the pursuit of my educational and professional goals. I am looking forward to using the knowledge and skills I have gained in the program to serve students.”

Murphy earned a bachelor’s in psychology from Columbus State University prior to coming to Georgia Southern to pursue a specialist’s degree in school psychology. In January, Murphy will begin her service as the University’s student representative for GASP, helping to bridge the gap between students and the professional field.

“For me, winning this award means that my hard work has not been overlooked and has provided me the opportunity to continue pursuing my education without any additional stress,” said Murphy. “As a recipient of this scholarship, I will be able to work in Georgia where there has been a state shortage of school psychologists and continue to serve on the board at the state and national levels.”

Smith was named GASP’s School Psychology Student of the Year. In her last semester of the program, Smith is expected to graduate in December after completing an internship with Bulloch County Schools.

“Winning the School Psychology Student of the Year award was a tremendous honor,” Smith said. “Knowing that those in my field at the University, in our community and at the state level felt my efforts over the last three years were outstanding was truly humbling.”

Prior to beginning the school psychology program, Smith earned a bachelor’s in early childhood education from Georgia Southern and taught kindergarten in the Savannah-Chatham County Public School System. During graduate school, she has served as a graduate assistant for the former Office of Career Services and the school psychology program. She is an active member of NASP and GASP, where she served as Georgia Southern’s Student Representative on the organization’s executive board. Smith also previously won scholarships at the state and national level.

“I hope that my receipt of the award inspired students to continue to strive for excellence, and believe in themselves as they balance many roles and tasks in their pursuit of becoming a school psychologist,” Smith added.