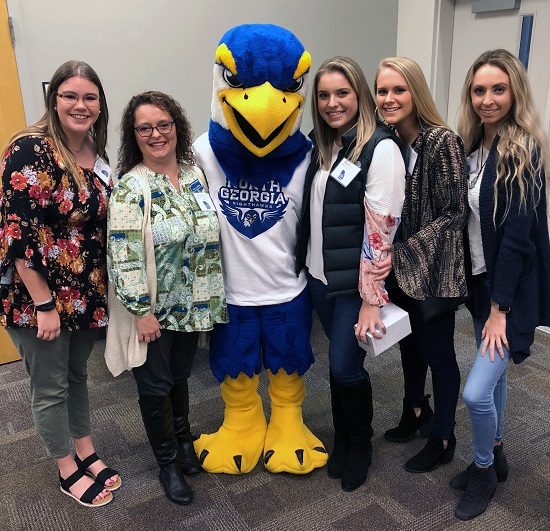 A student-centered research conference, GURC provides a platform for undergraduates to showcase original scholarship conducted in partnership with a faculty and/or staff mentor.

All five students completed observations of disciplinary actions within inclusion classrooms in various settings to record the techniques used by general education teachers when dealing with students with disabilities in their classrooms. Positive Behavior Intervention Supports (PBIS) is taught as a part of the curriculum at Georgia Southern, and teacher candidates are often looking for ways to encourage the use of this methodology as it provides redirection for P-12 students by telling them what they should be doing and why as well as providing praise for the appropriate behaviors.

Presentations included students’ preliminary findings, as they will continue observations in the spring semester, collecting additional data during their student teaching experience.

During a presentation session hosted by Brueck, she recalled the research which she completed specifically focusing on the discipline of a single student with autism. Brueck directed her observations on behavior specific praise for disciplinary action which interjects a positive statement intended to reinforce the desired behavior of an individual.

“Based on my observations, behavior specific praise was helpful in reducing the number of instances of inappropriate behavior,” Brueck said. “Each day, the student remembered to raise his hand more than the previous day. I expect to observe that the student will begin to raise his hand more before he interjects his personal stories into the lesson, and eventually, the student will not need to be precorrected for this behavior.”

Kesselring and Carroll completed a poster presentation about their observations within a high school setting in which they collected data from two different social studies classrooms. They observed that the behavior responses within the general education classroom often did not correct the student behavior.

“Instead, the students would shut down causing them to display behavior deficits in participation, work completion and interaction with peers and teachers,” said Kesselring. “In order to continue our research, we plan to implement PBIS token reward systems in our student teaching placements. Through this research, we will see if the students respond to PBIS implementation.”

Leggett completed a poster presentation that detailed her data collected while in a middle school in rural southeast Georgia. She found that while the teachers generally accept the idea of positive behavior supports for students with disabilities, they are often not  implemented.

“When it comes down to actually implementing the program in the school, people are hesitant because of the lack of trust in the potential outcome and the amount of work that goes with the system,” Leggett said.

Norris completed a session entitled “Class Climate: Student and Teacher Interaction,” in which she measured the effects of teacher and student interaction on the classroom climate. During her observations, Norris noted that incorporating PBIS methods that included clearly stating classroom expectations and correction and redirection of actions have an overall positive effect on the classroom environment.