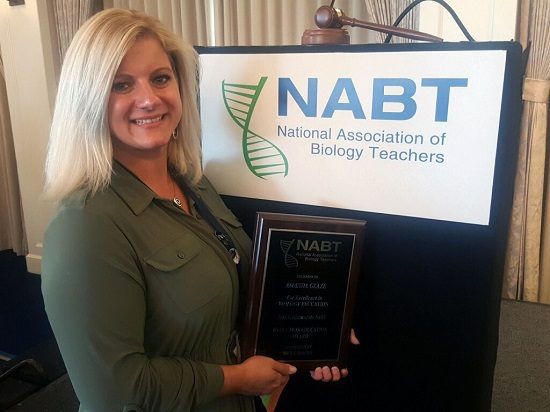 Sponsored by the Biological Sciences Curriculum Study (BSCS) center and the BEACON Center for the Study of Evolution in Action, the Evolution Education Award recognizes classroom teaching and community education efforts to promote the accurate understanding of biological evolution. The award is rotated between a K-12 teacher and undergraduate educator and includes a cash award, recognition plaque and a complimentary membership to NABT.

“Beacon and BSCS are huge names in science education and are dedicated heavily to the promotion of scientific literacy as well as accurate and meaningful teaching of science in classrooms across levels,” Glaze said. “Being selected at the national level and recognized for my work in evolution education is a huge honor because I am highly aware of the phenomenal community of researchers in this field and the incredible work that is being done to impact science teaching and learning as it relates to evolution.”

Glaze focuses her research on evolution education and the intersections of science and society that come into play with acceptance and rejection in the U.S. When speaking about her research, she always informs the audience of her religious upbringing in rural Alabama, laying the groundwork for how she finds passion in both her faith and the sciences.

“The idea that we must choose one or the other is a false dichotomy,” Glaze said. “What is necessary, however, is an understanding of both science and religion as distinct from each other, a sort of cognitive segregation, if you will.”

Glaze has been invited to speak at numerous conferences and engagements including the Smithsonian Institution’s Broader Social Impacts Committee annual meeting and a guest speaker at the HudsonAlpha Institute for Biotechnology.

Nominations for Glaze included colleagues and current students. They highlighted her passion for science education, specifically evolution understanding, and recognized her unique position as a common ground for a controversial topic.

“In a field where many of us have worked on the front lines we have seen the teaching of evolution as an us-versus-them battle, Dr. Glaze arrived on the scene and has helped to fundamentally transform how evolution education is approached, especially in the southern United States,” a colleague wrote. “By having a genuine understanding of both sides, she is uniquely positioned to become the bridge builder that the evolution education community in the southern U.S. (and beyond) desperately need.”

A student of Glaze’s wrote, “The way she talks to people, how she is able to have meaningful and powerful conversations with anyone, regardless of where they stand on evolution, is her superpower.”

Glaze added that it is an honor to work with organizations such as NABT whose support and investment in science provide a “ripple effect,” helping to amplify the research and message of an individual such as herself to the broader community.

“My research is centered around empowering teachers to teach evolution and students to have access to learning opportunities surrounding evolution,” Glaze noted. “Since evolution is such a touchy topic and is highly politicized due to the conflict perceived by the public, this directly impacts teacher effectiveness, accuracy in teaching of science and ultimately science literacy. All of these areas are part of the mission and vision of NABT. The support of organizations such as NABT bring together active minds that share in the vision for improving science literacy for all students.”