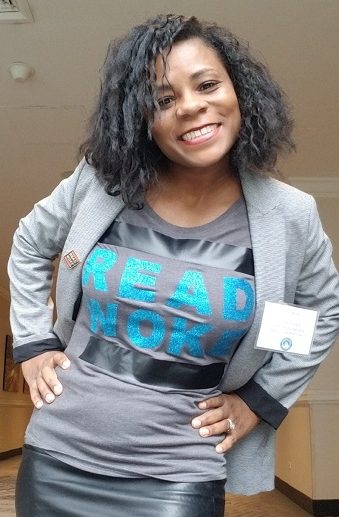 After more than 15 years of experience as a high school language arts and Spanish teacher, Lewis decided to make a career change to pursue a passion her colleagues and students continuously praised her for.

“I would host these huge events in my classrooms like poetry cafes and Harlem Renaissance celebrations, and other students in the school would come by and say, ‘I wish I could be in your class so I could participate,’” Lewis recalled.

With a talent for instructional technology and innovative reading curriculum, Lewis sought a school library media certificate from Georgia Southern University College of Education to make the transition from the classroom to media specialist.

“I selected Georgia Southern because the program was completely online and the university has an impressive reputation among educators,” Lewis said. “I learned so much from the school library program at Georgia Southern. The program was very challenging. Many times I didn’t think I could complete all of the work, but I persevered.”

Lewis says that the school library media certificate program required her to create social media accounts and participate in activities via the social channels. At first, she was hesitant.

“I was so apprehensive, but that was the best decision that I ever made,” she said. “Because of social media, I have reached so many people and learned so much. I also made my first screencast, and I was introduced to various educational tools that have greatly improved my instruction. Every assignment and project that I completed in this program was directly beneficial for my school media center.”

Lewis’ social media presence has also helped create a platform for her now worldwide effort to get students to read. The program, Read Woke, began in September 2017 as a reading challenge for students to explore literature that challenged social norms. Lewis was inspired by current events and social injustices and wanted to do her part to make a difference.

She created a reading list of books for Read Woke that fit a criteria of challenging a social norm, giving a voice to the voiceless, providing information about a group that has been disenfranchised or having a protagonist from an underrepresented or oppressed group. Lewis felt these books would help students to learn about themselves and other groups while also engaging in serious dialogue.

In less than two years, Read Woke has grown into a movement Lewis calls Read WOKE across America.

“The program has spread like wildfire,” Lewis said. “I have changed it to allow students to bring a book to me and justify why it is Read Woke, and they can use it. The program has grown to include several media specialists from Gwinnett County high schools. I have also expanded it to include picture books for elementary students.”

As such, Lewis was honored with the Atlanta Journal-Constitution Top Teacher of 2018 award and as a 2018 Dollar General Teen Read Week grant recipient.