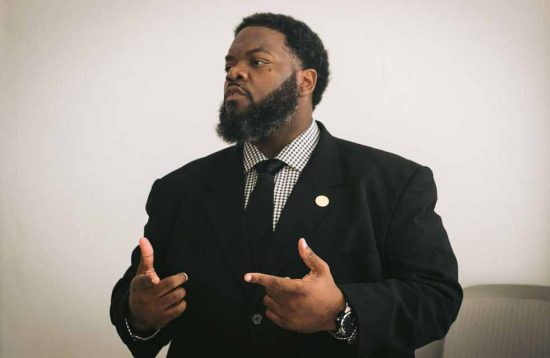 On Friday, May 10, Chris Pugh, will stand on the commencement stage and be hooded to symbolize the completion of the Educational Doctorate in Curriculum Studies program at Georgia Southern University. But to Pugh, this moment will symbolize so much more.

“In every program I have been in at Georgia Southern, I have experienced some form of adversity, but I kept going,” Pugh said.

During his undergraduate degree, Pugh faced academic exclusion, during which he returned home to Dekalb County, Georgia, and worked three jobs simultaneously until he realized he was ready to return to college and finish what he started. After earning a bachelor’s in broadcasting, Pugh pursued a master’s in school counseling, a program he was accepted into on a probationary basis due to his low grade point average.

Prior to his academic pursuits, Pugh was aware of his talents in communications and guiding others through conflict. His bachelor’s and master’s degrees provided him the theoretical knowledge to strengthen those talents and even opened the door to one of his current career pursuits — comedy.

“My first comedy show was in Statesboro” Pugh said. “That’s when I found my passion, regardless of whether someone was paying me for it or not. The comedy stage was my counseling center. People out there are hurting, and laughter can heal.”

Pugh thought a master’s degree would be the end of his academic career at Georgia Southern, but in the summer of 2013, he found himself enrolled in the Ed.D. Curriculum Studies program.

“It was the best academic decision I have ever made,” he said. “It was the missing piece of the puzzle in my life — the spark plug I needed to keep going.”

Pugh says that the curriculum studies doctoral program made him realize he could tie all of his passions and talents into one. Communication arts, comedy, counseling and curriculum — the four c’s.

Applying the theories taught in his doctoral coursework, Pugh began to help others through his comedy by applying counseling and counter-narrative framework within his routines.

“Once you have people laughing, you know you have their attention,” he explained. “They don’t mind learning if they are enjoying it. So you can drop knowledge on them in between jokes, and they don’t even realize you are educating them at the same time.”

Pugh’s doctoral dissertation, “Humanity in the Black: Applying Counter Racist Logic with Comedy and Hip-Hop,” provides a unique examination of the power in comedy and music to help individuals and teach them about themselves.

“I think the easiest way to summarize Chris’ dissertation is to say it is about how black men survive constant threats of racism in the U.S. with comedy and music,” said John Weaver, Ph.D., professor of curriculum studies and Pugh’s dissertation chair. “It is a performance piece that incorporates comedy routines and hip-hop lyrics to navigate academia and society as a black man.”

In his research, Pugh cites the work of Neely Fuller, Jr., who created a counter-racist code that provides methods and actionable items for those dealing with racism. Using the theories and applications of Fuller’s work, Pugh references the narrative through his own experiences of learning about culture and finding motivation from hip-hop artist Ruben Bailey, also known as Big Rube, and comedians Richard Pryor and Paul Mooney.

According to Pugh, Big Rube included interludes at the beginning of many rap songs produced by renowned Atlanta production group, the Dungeon Family, that changed not only Pugh’s life but many others all over the world.

“Big Rube helped thousands of young men critically think about their next steps in life,” Pugh said. “I made my own compilation CD of Big Rube interludes growing up, and it drastically changed my decision-making skills.”

“These artists are teachers,” Pugh added. “They taught me through laughter and spoken word. All comedians possess the unique ability to grab the attention of human beings. That is why I think comedy is so powerful. I think it is a superpower. You can command the whole room.”

When asked if he will keep doing comedy now that he has completed his doctorate, Pugh immediately responded with, “I have to. It’s like asking if you will keep drinking water.” But he also plans to use his doctoral education as well.

“I will be teaching, whether it is inside or outside of a classroom,” Pugh said.

One thing is known for sure — he will not give up on his goals or dreams.

“The completion of his dissertation is a profile of perseverance,” Weaver said.