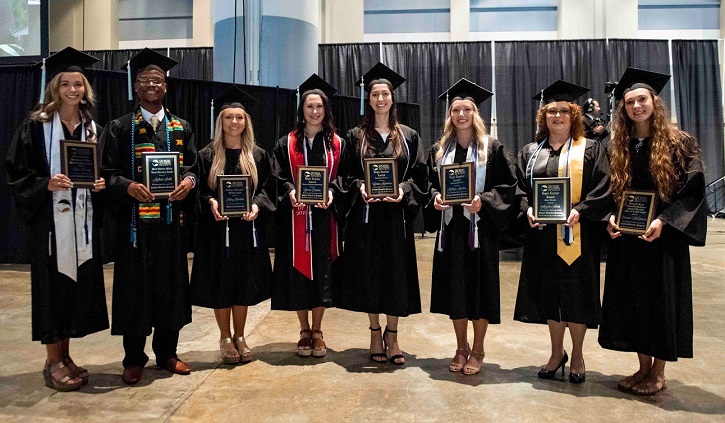 “We were excited to have the opportunity to recognize these students during the College’s ceremony in front of their supporters, faculty and fellow classmates,” said Deborah Thomas, Ph.D., associate dean for initial educator preparation and assessment. “These highly competitive and selective awards allow us to recognize the students who have exceeded the high expectations we have for our teacher candidates in demonstrating the knowledge, skills and dispositions required of effective beginning teachers.”

Receiving the Ronnie Sheppard Excellence in Middle Level Education Award was Katie Kennedy, a middle grades education major focusing on concentrations in mathematics and social studies. The award is presented annually to a student teacher or recent graduate who has demonstrated excellence in the middle grades program.

Michael Smith received the Marti Schriver Middle Level Advocacy Award, which is presented to a student who shows improvement of middle level students both within and beyond the classroom. Smith focused his middle grades education course work in the fields of science and mathematics.

The College of Education Excellence in Writing Award was presented to Haley Hamilton to recognize her academic merit in undergraduate writing in the COE’s initial certification process. Hamilton completed a bachelor’s in middle grades education with concentrations in English/language arts and social studies.

Acknowledging an exceptional health and physical education major, the William R. Spieth Outstanding Health and Physical Education Major of the Year Award was given to Brianna VanDeursen.