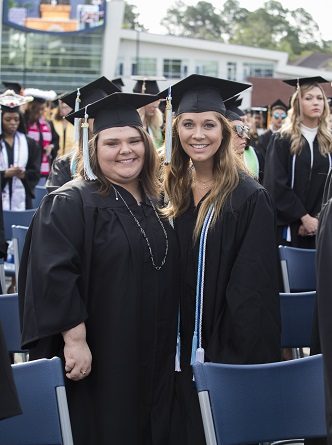 During Georgia Southern University’s Spring 2019 Commencement, held at Paulson Stadium in Statesboro, Georgia, Kasey Hayes not only became the first student to successfully complete the university’s EAGLE Academy program and participate in commencement alongside Eagle Nation graduates, but she also overcame a lifetime of adversity.

“I was very emotional at graduation,” said Hayes. “I was picked on in high school and middle school. People would put me down. They told me I wouldn’t be able to make it in college or that I wouldn’t even be able to go to college.”

With the help of EAGLE Academy, an inclusive post-secondary education program, offering Equal Access to Gainful Learning and Employment (EAGLE) to students with mild intellectual disabilities, Hayes was able to prove them wrong.

Hayes was one of the first students to enroll in the program when it began in fall 2017. At the time, she was interested in childcare. Through the Academy program requirements, Hayes completed two internships that provide students with experience and preparation in the workforce. Her first placement was with the First United Methodist Preschool.

“I wasn’t really sure what I wanted to do when I first started the program,” she said. “I realized that while I love kids, I didn’t want that to be my career.”

Hayes redirected her passion for helping others and obtained an internship with Willow Pond Senior Care in Statesboro.

“I fell in love with it,” Hayes said. “Since I was young, I have enjoyed taking care of others. I have now realized that I want to work with the elderly.”

Having a clear vision has motivated Hayes further. She is enrolled in the practical nursing program at Ogeechee Technical College for the fall semester with the goal of one day obtaining a nursing license.

None of this would be possible, Hayes explained, without Georgia Southern and EAGLE Academy.

“I don’t think I would be the person I am now if I had not gone to Georgia Southern,” she said. “EAGLE Academy has made me a more sociable person. They taught me about finances and helped me learn how to be independent and responsible.”

According to Hayes, she worked harder in her college classes than she has ever worked before. 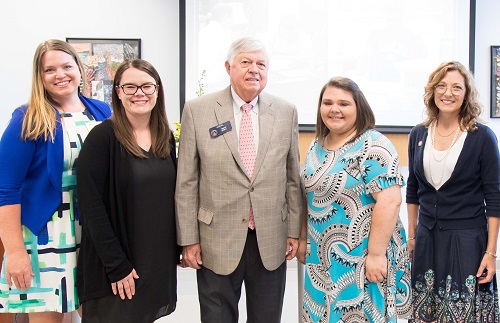 “My mentor, Amanda Floyd, would push me to study and work hard,” said Hayes. “With time, I wanted to do it for myself. I knew that Amanda would be a good mentor. We clicked like sisters right away.”

Floyd and Hayes participated in the university commencement ceremony together, as Floyd completed a bachelor’s in special education.

“Not only did I graduate, but I also got engaged that day,” said Hayes. “At one time, I didn’t think I would ever get married or graduate. So to have both become a reality in one day overwhelmed me with emotion.”

Hayes says that today, she is no longer the shy, self-critical girl she once was.

“Just because I have a disability doesn’t mean I cannot do what you can do.”