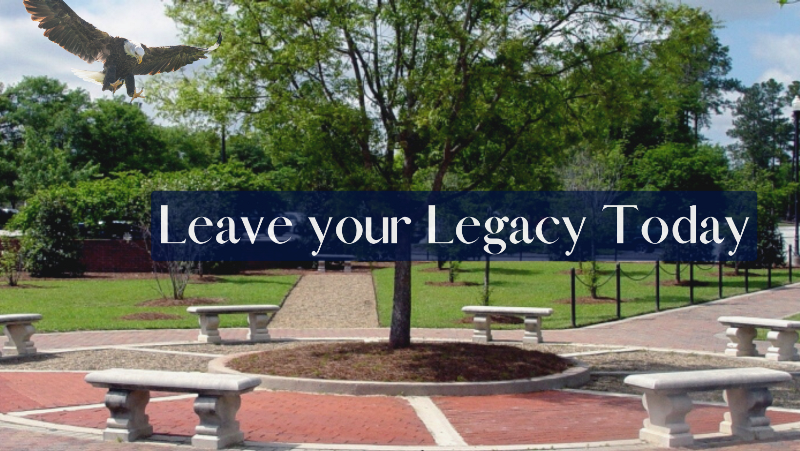 Leave your legacy and be a part of the history of EAGLE NATION with the purchase of a commemorative brick in Centennial Plaza (located between the College of Education and the Information Technology building) on the Statesboro campus of Georgia Southern University.

These engraved bricks make wonderful gifts for graduates, alumni, favorite professors, an individual who has made a difference in your life, and loved ones including parents and children.  The possibilities are endless!

Your commemorative brick purchase of $150.00 includes an engraved brick installed in the wheel of the Centennial Plaza, a certificate of ownership suitable for framing, and all brick purchases are 100% tax deductible and support student scholarships.

Bricks may include up to three lines of text (a maximum of 20 characters per line, including spaces and punctuation), with words of your choosing. Greek letters are acceptable to include in your personal message.

Orders will be placed in June, October and February and take approximately 6-8 weeks for production and installation. Upcoming deadlines for orders are as follows:

See what our alumni are saying…

“This brick was a graduation present from my family. I attended Georgia Southern from 2005-2008. I began my studies as a pre-pharmacy major. I quickly found out that pharmacy did not interest me but I was at a lost on what to study. I signed up for intro to philosophy class with Dr. Bill Eaton. Within just a few classes, I was hooked and my life would be forever changed. I switched my major and my true “search for knowledge” began. I now own a law firm in Atlanta where I practice trial work for people charged with criminal offenses. Do yourself a favor and sign up for a philosophy class while attending Georgia Southern, there is no telling what you may find!”

“Lauren was the first person I met when I chose Georgia Southern University as my home for the next four years.  We met on Facebook in the Class of 2017 Georgia Southern University group, and always joked that this was one of the best online relationships we ever had.  It was true though, we really had a special friendship, Lauren and I.  From the first time I met Lauren I knew there was something about her I liked.  That like turned into love and that love turned into one of the best friendships I could ask for.  Even though we only had three years together, I am thankful for the impact she had on my life.  This brick is a dedication to you Lauren for all the laughs, tears, hugs, and memories we shared here at Eagle Nation.  Thank you girly.”