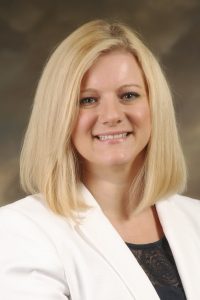 Amanda Glaze, Ph.D., assistant professor in the Department of Teaching and Learning, said her involvement with the Smithsonian Institution all began by sharing her research on Twitter. Not long after being featured as a guest writer for ErrantScience.com and RealScientists.org, invitations spurred from Twitter connections. Glaze was contacted by Briana Pobiner, Ph.D., Director Education and Outreach for the Smithsonian Institution’s Human Origins Program. Pobiner and Glaze discussed shared research interests about evolution education specifically focusing on improving the teaching and learning of evolution in K-12 settings.

Today, Glaze serves as a co-investigator on a grant the Smithsonian Institution has received from the National Science Foundation (NSF). In mid-September, Glaze was informed that the team’s grant was fully funded in the amount of $1,083,000 over the next five years. It is the second grant in a series that began with a three-year NSF grant to develop teaching modules for AP biology students. The grant, entitled “Learning Evolution through Human Examples” focuses on the redesign of the early AP teaching modules for use in general high school biology courses to encourage and support the teaching of human and non-human evolution in the curriculum. The program also provides culturally responsive teaching strategies for broaching topics that are deemed “controversial” in the public arena.

Glaze explained that within advanced placement (AP) biology courses across the country, the curriculum is standardized and includes a focus on evolution. However, in many traditional high school biology courses, evolution is often rushed or avoided, even though it is often a part of the state standards and has a significant presence in the Next Generation Science Standards (NGSS) at the national level.

Glaze says the lack of education on evolution is a disservice to the field of science and the students. Regardless of beliefs, education of the sciences is vital.

“Science literacy is a way of thinking and understanding in the world,” she explained. “Students need to be taught to understand and process decisions based on empirical evidence.”

Glaze and her team have already begun the process of reviewing applications for teachers to participate in their program within the state of Alabama, which was selected because of its representational value of the Southeastern views of evolution. Two groups of eighteen teachers will participate in the development of curriculum for evolution education over the life of the grant, with implementation in classrooms occurring between cohorts.

“I am extremely lucky to be a part of this team,” said Glaze. “Being able to work with the Smithsonian Institution’s Human Origins Program, and with such an accomplished research team as a beginning faculty member and researcher is really incredible.”

In December 2017, Glaze will serve as the lead on a similar grant with the Smithsonian Institution’s team to focus on current educator training in evolution education in Georgia.